For more than a year Julian had been asking Public Works Director Jim Ewing to fix situations that were dangerous for pedestrians. In a November 1991 letter he finally asked Ewing to respond to two particularly worrisome problems within 10 days. Again, no response. 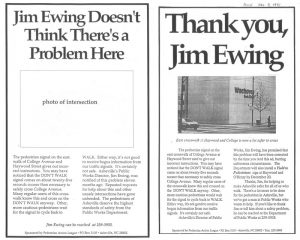 On December 4,1991 Julian sent Ewing a letter, with mock-ups of two ads, each with a photo of one of the problem intersections–Haywood Street and College Avenue. Julian wrote, ‘One of these ads is going to run in the Asheville Citizen Times on (date). If you are ready to give me a date for the completion of the two problems I mentioned in my letter of 11-15-91, then I will be happy to run the Thank you ad. If not, it will be the other one. You choose.”

The day before Julian’s deadline, the problem was fixed.

Always courteous, Julian quickly wrote Ewing: “I’m glad that you found a device to satisfy both pedestrian safety and proper vehicular improvement. Thanks for your concern for pedestrian safety.”

Fed up, in March 1992, Julian wrote McDonald about street sign names that he had repeatedly asked to be fixed, plus a dangerous-to-pedestrian crossing at Pack Square saying, “It is my understanding that a citizen who sends in specific complaints about problems that need solving is supposed to receive a reply from the appropriate city department as to if and when the problem will be taken care of. If this is indeed a policy of Asheville then I expect a prompt reply describing what will or will not be done relating to the above-described problems. If this is not a city policy, I would like to be informed of same.”

A few weeks later Julian did get a response – this time from City manager Doug Bean who told Julian that his communication style was “somewhat threatening”, “destroys any working relationship” and could cause “community alarm.” This was the last straw. Julian wrote back with a six-page missive quoting letters he had sent over the last year with repeated polite requests for action for pedestrian safety, with appreciations for any action given, and offers to give staff assistance as they would like it.

Sometimes a roadblock is an invitation to begin a whole new journey. Unwittingly, Bean encouraged Julian to take his complaints to a bigger audience. A few months after Bean’s letter, Julian began publishing CityWatch, which covered a wide range of topics, and gave a platform for other people who wanted changes in their neighborhoods and communities. Through the magazine, he encouraged others to speak up too, and to realize that the little things they cared about are important.