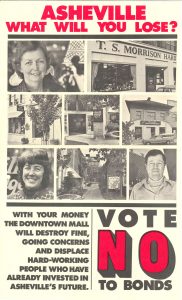 Like many communities across the US in the 1970’s, Asheville’s downtown was largely empty and boarded up as retail moved to the suburbs. In an effort to address the financial woes of the City center, City officials and many prominent members of Asheville’s business community proposed razing much of downtown and building – a mall. The community fought back. The pro-mall organization “Building a Better Asheville” aligned against members of “Saving Downtown Asheville”. A bond referendum necessary to pay to tear down 11 blocks in the heart of Asheville was defeated 2:1. It was a turning point for downtown as Asheville residents realized how much they valued their downtown and how close they came to losing the very heart of their community.

In the years following World War II, the landscape of the United States was dramatically transformed as much of much of the countryside surrounding its cities became housing for the millions of returning war veterans. As the residential suburbs grew so too did the demand for close, convenient shopping.  As the major department stores abandoned downtowns in favor of the new shopping centers and indoor malls, cities large and small began to decline rapidly.  Once bustling downtowns became ghost towns. Without the department stores, smaller boutique stores could not survive and without shopping, restaurants and theaters could not survive.  While no city was spared, small cities, like Asheville, were especially hard hit. 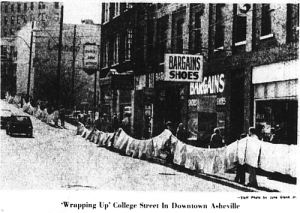 In 1980, a special commission appointed by the city recommended to council that the way to save downtown Asheville was to level eleven blocks of it and build yet another indoor shopping mall. Council approved it unanimously, but the plan required a $43 million bond referendum to acquire the properties and raze the buildings.  A handful of citizens and small business owners organized “Saving Downtown Asheville” in opposition to the pro-mall “Building a Better Asheville.”  In an ingenious public relations move, Saving Downtown Asheville wrapped all eleven blocks in sheets to illustrate what was going to be lost.  Their efforts paid off and voters defeated the bond referendum by a 2 to 1 majority. It was a turning point for the Asheville as city residents realized how much they valued their downtown and how close they came to losing the very heart of their community.

McKenzie Whalen, as part of UNC-Asheville’s 2015 Digital History Course, produced an  online comprehensive history of the 1980 proposal to build a mall on Lexington Avenue in Downtown Asheville. She has generously allowed us to share her work here.